You are here: Home / Archives / Destruction of the Prison Industry 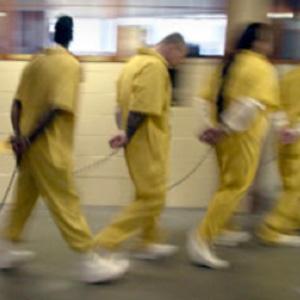 Crime is in the eye of the beholder, and from a revolutionary perspective, the prison industrial complex has not deterred crime. For us, crimes include the bailout of criminals on Wall Street and the U.S. and NATO war on Libya where we have seen innocent people killed and the country’s infrastructure destroyed. However, capitalism defines crime differently, and clearly African people and particularly African youth are the targets of a global, corrupt prison-industrial complex.

The major crimes in Africa are neo-colonialism and imperialism, where blood thirsty, reactionary, greedy leaders of African states in conjunction with imperialists’ forces start wars against African people. At the same time, in the Democratic Republic of Congo (DRC), Kenya, Uganda, Azania\South Africa, et cetera the African masses are accused of “crimes” and forced into prison merely because they defy the abuse of power from the neo-colonial state and the abuse of foreign imperialist pressure.

The United Nations weighed in on the prison problems in the DRC in 2009 reporting unconscionable prison overcrowding. It was reported that in Central Prison in Goma, North Kivu, 22 female prisoners were raped. Unfortunately, DRC is not unusual.

A scathing 2007 report by a Human Rights group in Kenya states: “male wing of the prison consisted of one ward measuring 15 by 10 feet. This ward held 176 inmates. There were only 67 mattresses and 80 blankets to be shared among the 176 inmates. There was no internal toilet or shower, and the external toilets and showers were in deplorable condition. The cells lacked a drainage system, and floors were covered with potholes that trapped water and bred insects. Furthermore, there was poor ventilation, and inmates were not provided with basic sanitation supplies such as toilet paper, soap, toothbrush, or towels.” The report stated, “the overcrowding at this prison was at a level that can only be described as inhuman and degrading.”— The Human Rights House Network

Human Rights Watch reports that in neighboring Uganda the conditions are likewise clearly inhuman and they cry out for attention and revolutionary change.

Fifty-six percent of Uganda’s prisoners – over 17,000 people – have not been convicted of a crime and are locked up awaiting resolution of their cases, sometimes for years. Limited use of bail and inadequate legal representation contribute to these delays.—Human Rights Watch.

The absence of conscience in the Uganda prison system has proven deadly. Prisoners are treated like cattle and herded along in the fields forced to work until death.

The police in neo-colonial Africa and in Uganda particularly often sweep poor neighborhoods in order to continue the slave like conditions, conditions that profit the evil elite. Prison officers reported that they could earn three months wages in a season off the forced labor of African inmates.

At some prisons, prisoners were paid nominal amounts of money, around 200 to 500 Uganda shillings per day ($0.09 to $0.21), or received small amounts of food, soap, or cigarettes as payment, but in most instances, prisoners received nothing.—Human Rights Watch

Prison systems may look a little different from place to place but African people world-wide suffer. Africans find themselves in prison circumstances similar to those of oppressed people everywhere – particularly those who are revolutionary. The Cuban Five are a case in point. In 1998, Cuban nationals Ramon Labañino, Rene Gonzalez, Fernando Gonzalez, Antonio Guerrero and Gerardo Hernandez were arrested in Miami, Florida. They were charged with 26 counts of violating federal laws. Their “crimes” involved alleged acts that were minor and non-violent but they are serving four lifetime sentences and 77 years in U.S. prisons collectively. Their mission was to infiltrate and monitor terrorist and criminal groups in Miami that are responsible for the deaths of thousands of Cubans and which pose a continuing threat to the Cuban people and the government of Cuba. For twelve years, Rene Gonzalez’s wife has sought a visa, but the U.S. has cruelly denied her the opportunity to even have a visit with her husband.

In the United States young people are under constant attacks and the prison system is waiting for them.

Nationally, 1 in 3 Black … boys born in 2001 are at risk of imprisonment during their lifetime. While boys are five times as likely to be incarcerated as girls, there also are a significant number of girls in the juvenile justice system. This rate of incarceration is endangering children at younger and younger ages.—Cradle to Prison Pipline, The Children’s Defense Fund.

To aggravate matters, prosecutorial misconduct, withholding evidence, and the like perpetuate racial disparities. Africans and Latinos make up more than half the total prison population. How many more innocent lives are wasting away in the cesspool of corruption?

Capitalism thrives because the labor force actually turns the wheels of production. Workers are grossly under paid and under appreciated in the U.S. In the following case we will look at how prison labor is used for profit

Mass incarceration is 21st century slavery that demands abolition. The A-APRP understands that capitalism must be destroyed before we can properly deal with the prison system. Join the All-African People’s Revolutionary Party!