You are here: Home / Cuba / Cuba and Haiti: The Stench of U.S. Imperialism 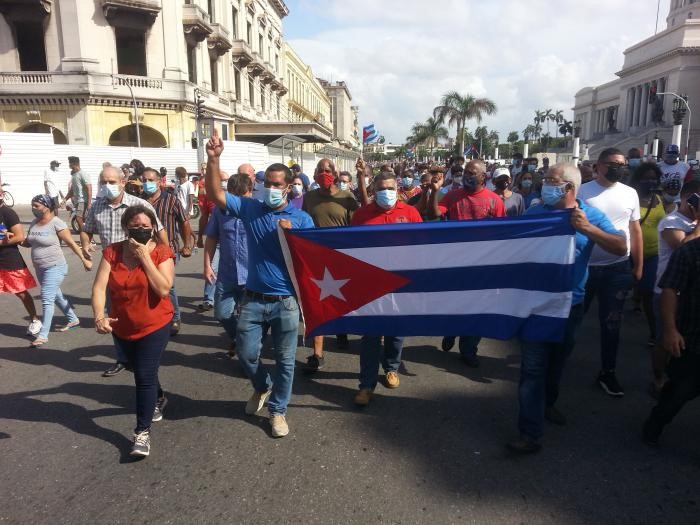 The recent assassination of the U.S. puppet President Jovenel Moise in Haiti and the counter-revolutionary activity in Cuba has a familiar smell. A rot, a stench that fouls the air. It is the reeking of U.S. imperialism. While details of the assassination are still unfolding, it’s well documented that the U.S. has a history of documented interference in both nations. These imperialist actions in Cuba and Haiti are part of an ongoing U.S. aggression in the region.

The recently assassinated Haitian president Jovenel Moïse, like his predecessor Michael Martelly, came to power through the selection, financing, diplomatic backing, and violent force of the U.S. government. And like a long line of presidents who were forced on the people of Haiti by the United States, Moïse was never accepted by the people of Haiti who want the freedom to choose their own leaders and determine their own destiny.  President Moïse a was a “puppet” leader who ruled Haiti at the behest of the United States. And while the U.S. press focuses repeatedly on Haiti’s poverty, they fail to tell the inform the public of Haiti’s wealth.  We are not told that Haiti has an abundance of natural resources, including gold, oil, and most importantly iridium, a rare mineral necessary for satellites and spaceships. Haiti also provides cheap source of labor of the United States and other foreign capitalists, as well as fertile agricultural land which farmers are being violently forced off.  Whether Moise’s death was a result of in fighting between the ruling class in Haiti or a direct hit orchestrated by the U.S. deep state, the results are the same. Moise was the target of the recent people’s uprisings in Haiti. He made enemies everywhere; disbanding the parliament and attempting to change the constitution, constitutional changes that would have benefited Moise’s ability to continue his rule. But like uprisings against Mubarak in Egypt popular uprisings are a threat to stability and often turn so called U.S. allies into liabilities. This is likely the case of President Moise. Let us be clear this statement is based on the U.S.’s historic role in Haiti, the region and what crimes imperialist have made and intend to make in Haiti.  The U.S. refused to recognize Haiti’s independence in 1804. The U.S. invaded, looted and occupied Haiti from 1915-1934. The U.S. deposed and then kidnapped the only popular democratically elected president Jean-Bertrand Aristide twice in 1991 and 2004 because he dared to raise the minimum wage and attempted to use the Haitian mineral wealth and land for the Haitian people.

Billions of dollars collected for the people in the name of the devasting 2010 earthquake that killed 200,000 or more, were stolen under the watch of former U.S. President Clinton. The United Nations Stabilization Mission in Haiti (MINUSTAH) did little to protect the masses of the people in Haiti. Some MINUSTAH forces, exploited and raped women, and youth of all genders. MINUSTAH where often used to protect neo-colonial interest and suppress the forces of Haitian resistance. We stand with the Black Alliance for Peace’s statement on no intervention in Haiti.

The United States has a long history of attempting to control Cuba, and the Cuban people have a long history of resistance. In 1959 Cuba fought for and won its independence becoming a free nation. Increasingly obsessed with overthrowing the newly independent Cuban nation, the U.S immediately launched an unrelenting series of covert operations aimed at forcing Cuba to return to U.S. domination. Presently, in its effort to strangle Cuba and overthrow its legitimate government, the U.S. authorized a program of covert actions against Cuba.   Millions of dollars are continually poured into Cuba to create and fund anti-government, counter-revolutionary forces.  Masking as “promoting democracy, the U.S. biggest weapon is the illegal blockade and sanctions, which have resulted in extreme shortages of food, medicine, fuel, and other necessities. The COVID-19 pandemic eliminated tourism on which Cuba depends heavily for revenue. Consequently, the Cuban people faced shortages, and many have expressed their frustration through protests. These so-called pro-democracy forces are easily detectable because they are the ones running around with U.S. flags chanting U.S. slogans. The clandestine forces portending to be left but talking right are far more dangerous. They often are supported by CIA propaganda post that pop-up over-night transforming them to international celebrities. A barrage of tweets from fake hashtags all repeating the same message have been found to emanate from robotic sources in the United States. This propaganda boosted by imperialist forces makes it appear that masses of people are in Cuba are in rebellion. They are repeated and repeated by capitalist corporate news sources; the New York Times, CNN, Fox, then by fake and so-called left publications who insist these forces are left of the Cuban Communist Party pick-up the stories. This is the old playbook used by imperialist to influence public opinion through fake news ran by imperialist intelligence agencies but more sophisticated today complete with blogs, tweets and their own left publications. There is nothing in the corporate news about the thousands and thousands of Cubans in the streets in support of the Cuban government. This does not fit the imperialist profile of a country about to fall. The U.S.’s brutal blockade has starved the people of Cuba for more than six decades, robbing Cuba of hundreds of billions in much needed resources. Yet Cuba’s international solidarity has grown. In the middle of a pandemic that has left people around the world in crisis both financially and medically Cuba produces 5 Covid-19 vaccines. With unbridled courage they face their economic challenges with dignity and resolve.  What we don’t see in the US press is thousands of Cubans who took to the streets to defend their sovereignty, their dignity, their freedom, and their revolutionary process. The All-African People’s Revolutionary Party stands with them.

We reject all forms of U.S. intervention in Cuba. We condemn the illegal blockade and all attempts to overthrow Cuba’s revolution. We unconditionally support the Cuban People and the Cuban Revolution.

US Imperialism and Cuban Genocide: A Brief History

Cubans March in Havana in Support of the Government