You are here: Home / Archives / Challenge of the Congo 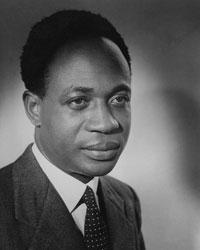 What follows is an imaginary interview of Dr. Kwame Nkrumah. All of his responses are quoted verbatim from his book Challenge of the Congo which was first published after the imperialist-led overthrow of the Ghana government in February 1966. As you will see, his observations remain highly relevant, and at times it may be difficult to tell whether the references are to Ghana, Congo, Libya or Ivory Coast. This book is an important weapon in our arsenal of history.

Q. President Nkrumah, in the 1960s, you, Patrice Lumumba and other Pan-Africanists came under intense attack by the U.S. and European imperialist countries for simply calling for African unity and African control of Africa. Recently, those same imperialist forces have not only continued their meddling in the Congo, but they have also intervened in Libya, Uganda and elsewhere in Africa. Why do they do this?
A. As far as the imperialists are concerned, Africa is not only “the richest prey on earth,” but also their last chance: the imperialists’ sphere of domination is daily shrinking…(pg. 189)
Q. You witnessed the brutal assassination of Lumumba in 1961 and the placement of his country, the Congo into the hands of a brutal African tyrant named Mobutu whose primary loyalty was to imperialism. As you say, imperialists are very interested in controlling Africa, but they seemed to be particularly obsessed with the Congo. Why?
A. If the Congo had not been so rich in mineral resources and the happy hunting ground of foreign monopolists, it would not have attracted such anxious attention and might have been left to solve its own problems. (pg. 211)