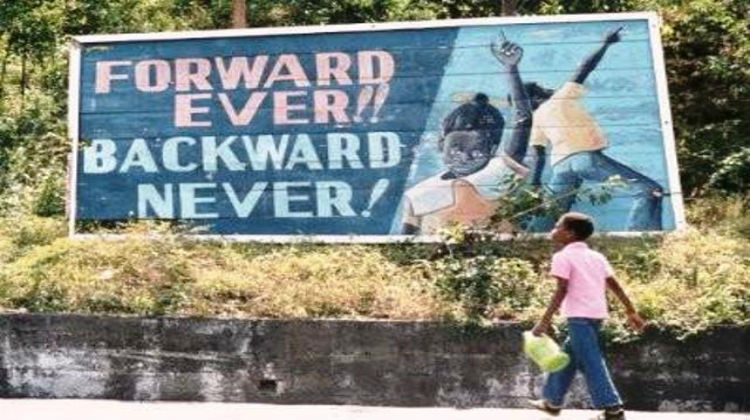 These were the words famously spoken by Kwame Ture talking about the betrayal by the leadership of the then Soviet Union against the World Socialist Revolution.  The point of the statement was to show how powerful ideas can be in the building or tearing down of a movement or nation.  The Soviet Union was militarily the equal of the U.S. imperialist empire during the period of the so-called Cold War, which lasted for over 40 years during the last century.  It was the political, economic and military strength of the Soviet Union which, despite the vehement opposition of western capitalist interests, allowed it to never be occupied or militarily attacked by the capitalists.  Thus the western imperialist powers (led by the United States, Britain and France) moved to wage a prolonged ideological and propaganda campaign to weaken the ideological conviction of the leadership and to demobilize the population from the organized defense of their socialist revolution.

What then is propaganda?  From dictionary.com one of several definitions includes the following: “the particular doctrines or principles propagated by an organization or movement.” Thus from this definition, we should know that the use of propaganda is universal and should not be considered simply as a negative concept.  Propaganda is used by both revolutionaries and reactionaries, by both freedom fighters and dictators, by both the oppressed and the oppressor.

From the point of view of the oppressed and exploited people fighting for freedom and justice, Kwame Nkrumah shows us the way and purpose of propaganda from his work HANDBOOK OF REVOLUTIONARY WARFARE:

“Propaganda is a means of liberation, an instrument of clarification, information, education and mobilization. It serves two different but essential functions in our (freedom) war:

In essence, propaganda is everywhere. It is designed to defend and promote your ideology AT THE SAME TIME it is to oppose and combat the ideology of the opponent.  Propaganda comes in MANY different forms and methods.  From Music to Movies, from newspapers to art, from laws to individual actions.  The goal of the propaganda of capitalism is to promote the interest of the capitalist class.  It is to promote the idea that some small segment of society was “born” to rule over the majority of the society and that the majority should never seek the power that they deserve as human beings. Racist and Sexist propaganda are designed to both convince the perpetrators that they are superior and are justified in the brutality (physical, psychological, etc) they mete out against their victims on the one hand and to convince the victim that they should accept the vicious treatment and marginalization on the other.  Conversely the goal of Revolutionary Propaganda for the people’s struggle must be to overwhelm the reactionary ideas that have been imposed on the thinking of the people and inspire and equip the people to join in, wage and win the revolutionary struggle of good over evil, of positive over negative, of socialism over capitalism.

WHAT MUST BE DONE?

There must be a SHIFT in our thinking which will cause a logical shift in our behavior.  We must build a propaganda (information) army designed to win over the minds (and eventually) the bodies of our people to the side of the revolution (e.g. to the side of ourselves). Once our people are brought to realize that we are at war, we will no longer appeal to our oppressors for anything.  Instead of begging for more positive images of Africa and African people from the TV and movie studios of the capitalists, we will focus on developing our own TV and movie studios.  African people have produced some of the greatest writers, storytellers (Griots), artists, musicians, painters, etc the world has ever known.  We need to put the current and future generations to work for our people and our agenda.

Under revolutionary governments, whether Grenada under Maurice Bishop or Burkina Faso under Thomas Sankara or Cuba under Raul and Fidel Castro, to name a small few, the entire society is setup as a canvas for revolutionary ideas and values from billboards and graffiti murals to revolutionary music and films.  As we struggle to gain revolutionary power over Africa and our African communities throughout the world, we must use the space we currently control as a weapon to attack the enemy and promote the people and their revolution. At the same time, we must also struggle to educate our people inside the spaces controlled by the enemy and spaces the people are contesting for control. In the Masjid, the church, the temple, the workplace, the trade unions, the schools, farms, etc.

Community Empowerment groups can ban together and buy billboard space in our communities promoting the revolution.  Property owners can allow their buildings to be used by revolutionary graffiti artists to paint murals promoting our heroes and sheroes, past and present.  Buses and cars can be covered with bumper stickers calling our people to critical thinking and revolutionary action.

We should strive to expand have independent community controlled radio stations; whether internet radio and short wave community radio where music content is orientated towards revolutionary content and discussion topics revolve around community issues and solutions and not irrelevant celebrity news and gossip.  We must utilize the relatively inexpensive means of social media to share information, struggles and victories of our people as well as other peoples’ fighting similar struggles as ours, across borders, waters and languages.  We must continue the trend towards independent schools separate from the bastardized state institutions, but connected to other like minds to promote common ideas and values and develop our youth towards self-reliance and revolutionary cooperation.  In short we must use any and all means within our reach to inspire and educate our people.

Revolutionary ideas must come to dominate the discourse on public transport, in bars, lunchrooms and dinner tables within our community.  We do not want to have a balance between positive and negative ideas and values.  We want positive and revolutionary ideas to overrun and crush the negative and reactionary ideas.  Our people’s propaganda army will help recruit, solidify and build a political army that will bring us towards liberation and redemption of Africa and her children everywhere.  The All-African People’s Revolutionary Party (A-APRP) is playing its humble role in this process.  We encourage you to join us and increase our capacity to higher levels for the benefit of our people and the righteous of the world.