You are here: Home / Archives / Breaking Down What’s Happening in Sudan 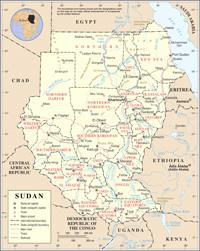 There is widespread confusion about Africa in general, and about developments in Sudan in particular. Much confusion results from widespread ignorance of Africa’s history, politics, and contemporary developments. Added to that mix are deliberate efforts by Africa’s enemies to use mass media to promote an agenda that is neither just nor in the interests of Africa. Let’s look at what’s actually happening in Sudan.

A recent referendum divided Sudan and established a new country in what had been the southern region of the country. The African Union (AU) reported that in 2011 there were 45 million people in greater Sudan’s territory, consisting of 33 million Arabs, and a little more than 8 million others of various ethnic groups. The population of the newly created Southern Sudan will be made up of many of the ethnic groups that are non-Arab. Nevertheless, the population breakdown should not be regarded simplistically as “Arabs” in the north and “black” Africans in the south, because this increases confusion among those who are already misinformed by media reports that claim hundreds of thousands of people have been killed in the Darfur region of Sudan since 2003 because of supposed Arab racism directed against “black” Africans, or supposed Muslim attempts to dominate Christians.

Certainly multi-national corporations and the western governments push the idea that the conflict in Sudan is primarily racial or religious. They are aided in their efforts to shape the world’s perspective by their ideological allies such as certain major religious groups. Many well-meaning people, including many Africans, have accepted this premise, primarily because they lack knowledge of Africa, its history and dynamics.

To gain an accurate understanding of political events, it is helpful to remember the prophetic words of El Hajj Malik El Shabazz, or Malcolm X, who said:

“the best way to determine who your friends are is to look at who uncle sam’s enemies are… Whomever he doesn’t like… That’s who you know you should run to.”

His statement is particularly instructive because multi-national corporations and capitalism generally have never been friends to Africa and African people. Capitalist success results from the exploitation of Africa. In fact, western industrial development is rooted in the triangular slave trade that spawned many spin-off industries like insurance companies that sold premiums on Africans as “property.”

Today, capitalists still depend on cheap African natural resources and labor to make profits. Understanding this is key to understanding what happens politically in Africa today. It explains much of what is happening in Sudan, as well as Libya, Egypt, and other areas of Africa. It helps to explain why racial and religious conflicts do not fully explain what is happening in Sudan. These same religious and ethnic groups have lived in Sudan for hundreds of years without the violent conflicts we’ve seen in recent years.

Much of the violence is the government’s response to insurrection. The former government armed mercenaries called the “Janjaweed” who are alleged to have committed mass atrocities. They have also been characterized as “Arabs” who have targeted “blacks.” But credible observers have asserted that there is little racial difference among the “black” population and many of the Janjaweed. Let’s also look at a key point: The United Nations estimates that almost 40% of Darfur has been contracted out to foreign countries for oil prospecting, drilling, and refining. In asking why there is violence in Darfur, doesn’t it stand to reason that the exploitation of Darfur’s resources is much easier if insurrection and resistance in the region is suppressed – violently if necessary?

In the long run, balkanization (division) of Sudan does not address the true causes of problems in the region. Balkanization anyplace in Africa will not help the continent, and Sudan illustrates why this is so. Sudan was unable to provide any type of sustainable life for many of its people before it was divided, and now, not only is this task more difficult, it is certainly easier for capitalists to steal and exploit Sudan’s natural resources. The solution to these problems of sustainability and development, from a political and economic standpoint, is not secession. It is unification. It is the elimination of the borders in Africa that benefit only foreign capitalist interests.

The future of Africa depends upon the achievement of Pan-Africanism – a United States of Africa with one national government, one currency, and a socialist economy. This objective will immediately boost Africa’s international standing while providing stability and security for all of Africa’s people wherever they may be in the world. The struggle for Pan-Africanism is underway today. Africans all over the world are working hard to bring about the fulfillment of this aspiration. We call upon you and all justice loving people to join this struggle.