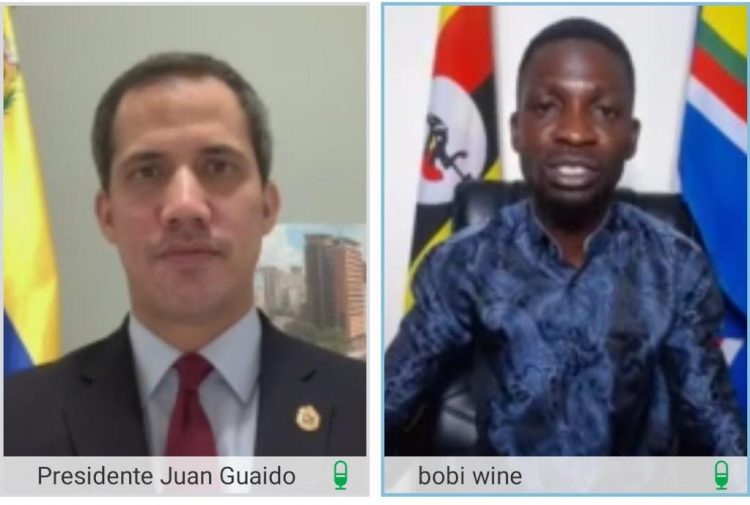 “VERY PLEASED TO SPEAK WITH PRESIDENT @JGUAIDO OF VENEZUELA THIS EVENING. WE DISCUSSED THE WAY FORWARD FOR BOTH COUNTRIES, AND THE NEED TO BUILD SYNERGIES FOR THE DEFENCE OF DEMOCRATIC PRINCIPLES AND HUMAN RIGHTS ACROSS THE GLOBE.”

Sobukwe Shukura, part of the African Delegation who observed the December free and fair elections in Venezuela, joins the outrage of all democratic and anti-imperialist forces in denouncing this reactionary declaration of former Ugandan Presidential candidate Bobi Wine who declared a synergy of the democratic struggles in Uganda to the attempted coups in Venezuela led by Juan Guaido and the Right-Wing forces in Venezuela. The factual synergy that exists in reality is the one between the imperialist forces that finance Juan Guaido, his followers, and the forces of the current regime in Uganda who receive millions of dollars in military support. So, Bobi Wine which one do you support? Counter-revolutionary and imperialist forces in the west which prop up both the Ugandan government and Juan Guaido or the participatory democracy processes you claimed to represent in your campaign? Mr. Wine you may have just outed yourself as the kind of pro-imperialist opportunist who would be the right fit to ascend to the Ugandan presidency to protect the interest of imperialism. Maybe this is the real reason United States Ambassador Brown wanted to meet you?

Juan Guaido is a known representative of the most pro-imperialist and racist forces in the world.  Guaido is a tool of the capitalist class and receives millions from the U.S. government and its imperialist institutions (CIA, NED, AFL-CIO, and the houses Congress) to try to undermine the revolutionary process in Venezuela. The Venezuelan democracy is deeply rooted in the people’s Bolivarian process and shaped in people’s assemblies and referendums. Every mandate from the rewriting of the constitution to the adding indigenous peoples to the national assembly comes from the masses input. Juan Guaido’s self-declared Presidency is not only undemocratic but he has directly participated in the theft of Citgo (Venezuelan Oil Company) by the United States and the seizure of Venezuelan gold by the British Government starving the people of Venezuela of these much-needed funds. Why would Bobi Wine want to associate himself with Guaido, a neo-colonial agent, who has nothing but contempt for the poor.

Surely, Bobi Wine you have to know that Guaido represents opposition to housing for the poor, free education for workers and general use of the oil revenues for the people of Venezuela. Bobi Wine are you aligning yourself openly with forces of imperialism. Juan Guaido is aligned with forces like Lopolido Lopez who stoked the racist attacks against African Descendants in Venezuela in 2014 that resulted in the burning to death and other brutal killing of many African people in Venezuela. Watch who you get in bed with; history will judge you accordingly.

Sobukwe Shukura is a political activist and member of the A-APRP Central Committee, based in East Africa