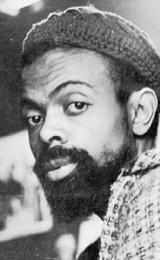 We are paying homage to the work of Comrade Amiri Baraka for Pan-Africanism and against zionism (by which he was attacked). We pay homage to his concrete political and artistic work against all forms of exploitation-his work with the Congress of African People; the National Black Political Convention in Gary, Indiana; the African Liberation Support Committee, including organizing African Liberation Day (ALD) in 1972 and 1973 with political and material support to our Liberation Movements in Africa; serving on the collective that received Comrade Amilcar Cabral in New York, 20 October 1972.

We re-dedicate ourselves to continuing his work with ideological and biological family. He is now in an eternal united front with our Eternal Comrades, including Kwame Turé. In his own words, Comrade Amiri Baraka said:

Do not weep. Victory is ours!

We humbly come to the families, (ideological and biological) with our heart in hand pleading to you to not mourn but to celebrate. Our Brother Amiri Baraka is now more alive than ever.

We who love him must re-dedicate ourselves to fulfilling his dream of a totally free, unified and socialist Africa to satisfy the aspirations of all Africans around the world and Humanity.