Humanity was blessed with the birth of our Eternal Pan-Africanist strategist Ahmed Sékou Touré on 9 January 1922.

To commemorate the 100th Anniversary, comrades who are faithful to the philosophies and strategies of Ahmed Sékou Touré, constructing an All-African People’s Revolutionary Party (A-APRP) offer of modest contribution and invite you to contribute. We call it “AST@100”. 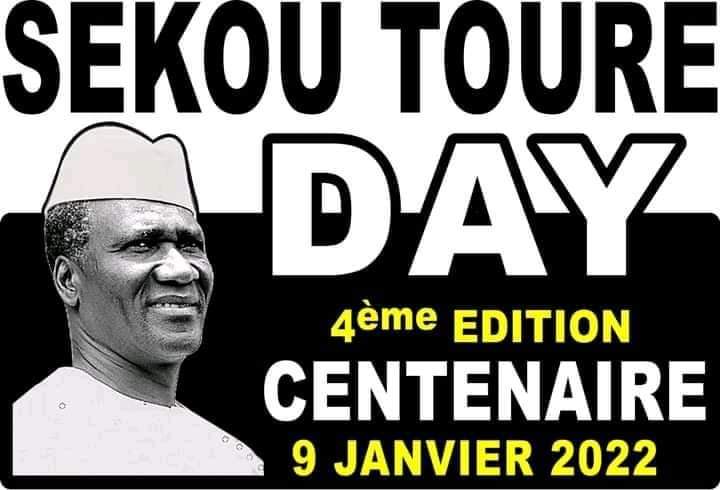 Below is a brief biography and partial list of books written by Ahmed Sékou Touré. We invite you to send your perspective on his life and works and your opinion of those books that you have read with a brief note with your perspective on how they have impacted your consciousness and actions. Send photos, video clips that wish to share to our Facebook and social media. We shall produce videos throughout January 2022 and beyond.

Ahmed Sékou Touré, first president of Guinea, trade unionist, revolutionary Pan-Africanist  was born on 9 January1922 in Faranah, Guinea (at the time “French Guinea”),to Alpha Touré and Aminata Fadiga, who were peasant farmers. Great-grandson of Almamy Samory Touré), founder of the Wassoulou Empire (1861–1890) in the territory now known as Guinea and Mali,who resisted French colonial rule until his capture in 1898.

A member of the Post and Telecommunications Department, Ahmed Sékou Touré formed Guinea’s first trade union, the Post, Telegraph and Telephone Workers’ Union, in 1945. He participated in the founding of the African Democratic African Rally (RDA) in 1947 and was nominated to become the 3rd Secretary General of the Democratic Party of Guinea (PDG), the regional branch of the RDA, in 1952, at the age of 30. He also helped create the country’s first general trade union in 1946, the Federation of Workers’ Union of Guinea, which was associated with the French communist-led trade union movement. He was enrolled in the Georges Poiret Technical College in Conakry in 1936 but was expelled less than a year later at the age of 15 for leading a student protest against the quality of food and quickly became involved in labor union activity. During his youth, Touré studied the works of Karl Marx and Vladimir Lenin, among others.

As a trade union leader, he assisted to organize workers across French Guinea for on a 71-day general strike (longer than any other territories in the French West Africa) in 1953 to force the implementation of a new overseas labor code. He was later elected to Guinea’s Territorial Assembly the same year. As a result, he was elected as one of the three secretaries-general of the French Communist Party’s Confédération Générale du Travail (General Confederation of Labour; CGT) in 1954. In 1957, he organized the Union Générale des Travailleurs d’Afrique Noire, a common trade union centre for French West Africa

In 1956, Sékou Touré was nominated to be the mayor of Conakry (capitol of Guinea) and elected a Deputy to the French National Assembly in Paris. By 1957, he was vice president of Guinea and was soon empowered to form the colony’s first autonomous government under control of a French Governor.

In September 1958, Guinea participated in the referendum on the new Constitution of France. On acceptance of the new constitution, French overseas territories had the option of choosing to continue their existing status, to move toward full integration into metropolitan France, or to acquire the status of an autonomous republic in the new quasi-federal French Community. If, however, they rejected the new constitution, they would become independent forthwith.

French President Charles de Gaulle made it clear that a country pursuing the independent course would no longer receive French economic and financial aid or retain French technical and administrative officers. In 1958, Ahmed Sékou Touré and the PDG-RDA, organized for a “No” in the French Union referendum sponsored by the French government. The People of Guinea rejected the new constitution overwhelmingly, and Guinea accordingly became an independent state on 2 October 1958, with Ahmed Sékou Touré, leader of Guinea’s strongest labor union, as president.

Imperialism, led by French imperialist (in coordination with other imperialists forces), systematically attacked the People’s Democratic Republic of Guinea in every way – economically, militarily, mis-information campaigns, attempted assassinations, etc.. They took all the infrastructure they could, including doors, lights, all the money from the treasury and even maps of underground electrical cables and water pipes.

Osageyfo Kwame Nkrumah and the Republic of Ghana assisted the newly Independent People’s Revolutionary Republic of Guinea with significant economic and political assistance.

The PDG-RDA organized the Masses of People in the villages and urban neighborhoods to carry out literacy campaigns, build schools, health clinics, hospitals, develop agriculture, organize the cultural life of the People, emancipate women and those who served as slaves to feudal chiefs.

On the African and International level, Ahmed Sékou Touré served as co-founder of the Guinea-Ghana-Mali Union in November 1958. With the PDG-RDA, he contributed to the establishment of the Organization of Solidarity of the People of Asia-Africa in 1959 and assisted with the First Tricontinental Conference that established the Organization of Solidarity with the People of Africa, Asia and Latin America in 1966.

With the PDG-RDA, he contributed to the organization of the First Pan-African Youth Conference, held in Conakry in April 1962 and establish the Pan-African Youth Organization. Simultaneously, the PDG-RDA gave bases to various Liberation Movements and Parties inside the People’s Democratic Republic of Guinea, including the African Party for the Independence of Guinee and Cape Verde (PAIGC) of neighboring Guinea-Bissau and Cape Verde during its armed struggle to end Portuguese Colonialism there.

Ahmed Sékou Touré offered the concepts of Party-State; national democracy; harmony between religion and Revolution and developed the concept of a Mass Revolutionary Party.

The currency of Guinea was one of the strongest in all of Africa and their debt was one of the smallest. Not even the enemies of AST accuse him of stealing money or building private houses. His car was a modest one and he lived a modest life.

After his physical disappearance on 26 March 1984 and the funeral ceremonies of 2 April, a coup d’état against the PDG-RDA Government took place on 3 April. The democratically elected President, Lasana Beavague and other officials were arrested with their properties confiscated, some killed while others went into exile. The PDG-RDA was prohibited from meeting and has not returned to State power since.

The influences of Ahmed Sékou Touré continue in Guinea and many parts of Africa and the world.