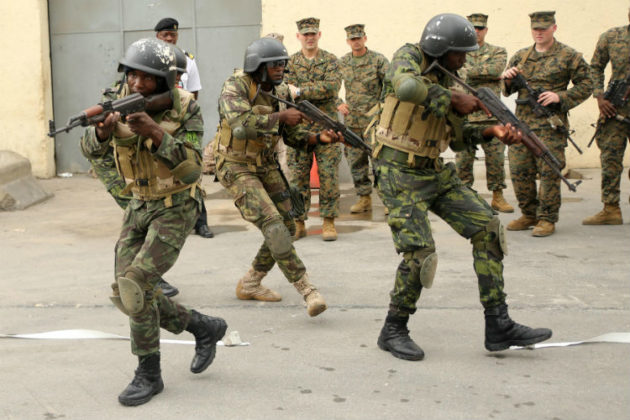 “Africa is the battleground of the future.” – U.S. General Linder

The hole in the side of the Daallo Airbus A321 February 2nd leaving Mogadishu bound for Djibouti was reported to be caused by a bomb. The western media will tell us this type of terrorism is the face of terror in Africa- what Africans must fear.  The fact the bomb goes off leaving the home of Al Shabaab only builds on the narrative that groups such as Al Shabaab, Boko Haram, etc. are the biggest source of terrorism and violence in Africa.

Africa’s biggest terrorist threat is not Al-Qaida, (IS), Boko Haram, or Al Shabaab. Terrorism resulting from capitalist imperialist’s occupations, their colonial, settler-colonial and neo-colonial projects far outstrips any other terrorism on the planet. The scores of African lives lost in the imperialist colonial project are immense. Belgium alone accounts for 14 million in the Congo alone. Germany’s genocide of the Herero and Nama people number 100,000 or more.  The internal terrorist threats in Africa today are related to the foreign maintained neo-colonial control over Africa and African people. NATO (North Atlantic Treaty Organization) and their neo-colonial allies are not the protector of secularism (separation of church and state) but the destroyer of secular or any other state which attempts to control their own resources; these imperialist institutions are dominantly the destroyers of democratic processes. The assassination of Patrice Lumumba, the overthrow of Kwame Nkrumah, Modibo Keita and scores other Pan-African revolutionaries in the 60’s up to the present, occurred in concert with NATO alliance members. These leaders were all democratically elected by the people.

What this false narrative masks is the military occupation and assault of Africa by the United States under AFRICOM and the former colonizers France, Britain, Italy, Germany and others under NATO. The number of secret drone bases and staging areas controlled by AFRICOM (U.S. Africa Command) has skyrocketed since 2007. http://www.blackagendareport.com/node/4844

The US and NATO continues destroying secular states in Africa and around the world like Libya, Somalia, Iraq, Iran (before the Shaw) and Afghanistan (before the Taliban) in concert with right wing fascist hiding behind Islam, they are aligned with feudal empires, the Arab Emirates,  Saudi Arabia, Kuwait and Bahrain. The US, who trained and supplied Bin Laden in Afghanistan (a country with which they have actively waged a destructive war for 15 years) is actively trying to destroy another country in the region, Syria.

Syria in 2014 held a presidential election where President Assad won 82 percent of the vote with a 74 percent turnout, which was monitored by more than 30 countries including Bolivia, Brazil, Cuba, Ecuador, India, Iraq, Nicaragua, Russia, South Africa and Venezuela. This monitoring delegation determined that the election was “free, fair and transparent”.

Yet the NATO and particularly the US forces continue to attempt to remove Assad from office despite the declaration from the monitoring group, while at the same time recognize the flawed election recently held in Haiti.

There are historical and current relationships between Al-Qaida and other so called terrorist organizations on the one hand, and the US and NATO objectives for global domination of resources, labor and markets on the other. NATO and its allies have armed and supplied these terrorist forces to do their bidding. Today’s criminal support for these organizations by NATO and its allies Saudi Arabia and the Zionist state of Israel remind us of the days when NATO stood and fought against the legitimate national liberation struggles in Africa. Africans cannot forget the intentions of these same imperialist forces for Africa–the control of our resources–and more importantly we can’t forget what they will do to keep them.

The A-APRP says AFRICOM and NATO out of Africa Now!!!!