You are here: Home / Feature Story / African Puppets of Imperialism Must Go! (Part I) 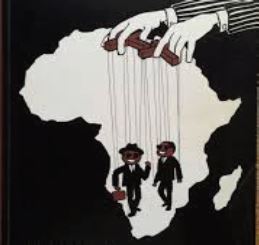 Revolutionary Pan-Africanism calls us to unite and forge a definitive struggle against neo-colonialism: Forward to one unified socialist Africa.

The All-African People’s Revolutionary Party (A-APRP) thanks you for your participation in the 2019 commemorations of African Liberation Day. This special day of work, study and organizing has become an institution across not only the length and breadth of Africa, but in all corners of the world where Africans have been dispersed, enslaved and oppressed.

African Liberation Day is an important element of “Revolutionary Pan-Africanism.”  That may be a term that is unfamiliar to some, but the essential meaning resonates with all Africans who have experienced or observed police terrorism, war, theft of natural resources, widespread poverty and illness, racial discrimination, inadequate education, and many other problems. These challenges are not limited to Africans found in only one part of the world. Africans everywhere are engaged in a desperate fight for survival – and far too many are losing. Victory requires more than positions in local government, or ownership of small businesses, or membership on corporate boards of directors, or even the support of well-meaning non-governmental organizations. Genuine African liberation requires power. Power does not mean money. Power does not mean fame. Power does not mean close association with those who have power. When Africans gain real power, Africa and Africa’s people worldwide will have the ability to determine and pursue their own destiny without anyone having the capacity to stop them.

Revolutionary Pan-Africanism is the time-tested strategy for achieving power. It is a strategy implemented by African people organizing globally to achieve one primary objective: the total liberation and unification of Africa under scientific socialism.

The total liberation of Africa is a critical element of Pan-Africanism. African countries may have African presidents, prime ministers and parliaments, but most of these countries are not under African control. Africa is largely controlled by western governments and foreign corporations. European countries understood back in the 19th Century that Africa possesses enormous natural resources of inestimable value. This one continent has gold, oil, coltan, chromium, bauxite, diamonds and numerous other valuable minerals.

By 1885, European countries had resolved to colonize and dominate African countries in order to gain full access to the continent’s wealth. African resistance to colonialism was protracted and fierce. By the end of the 20th Century this resistance had succeeded in driving European governments out of Africa and leaving African countries nominally independent. However this independence was illusory. Unwilling to surrender access to the valuable natural resources of Africa, imperialists devised a new form of colonialism that to all appearances was not colonialism at all. This new form of colonialism – or “neo-colonialism” relies heavily on the betrayal of Africa’s people by Africans who by one means or another control the reins of African governments.

Some of these African neo-colonial heads of state are vicious dictators like Mobutu Sese Seko of Congo, who during his tyrannical tenure stole much of the country’s treasury and had innumerable people killed. The U.S. and Western Europe turned a blind eye to his crimes for many years because he allowed foreign interests to steal and exploit Congo’s resources. There are still other African neo-colonial government officials who mean well, but they are constrained and directed by a well-organized system of imperialism (i.e., domination of a territory by external forces). Even these well-meaning government officials are bound to carry out the agenda of their puppet-masters in the U.S. and Europe.

Imperialist control of Africa is by force. If an African leader attempts to steer an independent course even after experiencing threats and coercion, intelligence agencies of the western governments will engineer a coup, or in some cases an assassination. In other cases where an African leader not only attempts to act independently but establishes effective defenses to subversion, imperialists may resort to economic warfare. This happened in Zimbabwe. Zimbabwe’s governing party, the Zimbabwe African National Union – Patriotic Front, initiated a program for the return of land occupied by European settlers to Africans. In response, the U.S., England and other western countries commenced and maintained an economic embargo against Zimbabwe for many years that caused substantial economic decline and consequent social and political instability.

Imperialism is also not reluctant to use armed force against those who do not cooperate with the neo-colonial agenda. This was made easier by the creation of U.S. Africa Command (AFRICOM). The purpose of AFRICOM is to dominate Africa militarily without appearing to dominate Africa militarily. The way it works is U.S. military forces serve as behind the scenes “advisors” to the armies of African countries. These African armies are directed to carry out missions that advance imperialist interests. One example is AFRICOM’s leadership in the overthrow and vicious murder of Moammar Gadhafi in Libya. AFRICOM armed reactionary and racist forces whose campaign of terror allowed the U.S. and France to gain control of Libyan oil fields and end Gadhafi’s plans for an independent gold-backed Pan-African currency. AFRICOM now has operations in almost all of the African countries.

Pan-Africanism requires Africa to be totally liberated from all of these foreign forces and interests so that Africa can not only genuinely govern itself but also control its own natural wealth for the benefit of its own people in Africa and in other parts of the world.