Africa is resilient and its people have survived centuries of underdevelopment, and severe marginalization. From the European slave trade, through colonial domination, to neo-colonial plunder, Africa’s resources and people have been, and continue to be, brutally exploited. This past history has left Africa severely underprepared to fight the coronavirus. African people on the continent and African descendants everywhere are feeling the impact of this virus. COVID-19 is affecting everyone.

Africa’s under preparedness and vulnerability is visible to the frequent visitor, long-term resident and obvious to those that live there. Open gutters, overcrowded and poorly resourced urban centers, and strained health care systems exemplify this fragileness.

According to an article in Atlantic Council, roughly 200 million people in Africa live in overcrowded cities and have limited access to plumbing and electricity, while about 40 percent of Africans live in places where it is a daily challenge to find clean water.”¹

The Centers for Disease Control and Prevention (CDC) has advised that social distancing is the best strategy to contain the virus. But Africa’s poor health infrastructure makes containment challenging and social distancing difficult to enforce. Many African cultures practice social closeness and frequent mass gatherings. In Ghana every weekend there are funerals, outdoorings (celebrations for newborn babies), and weddings. According to Dr. Neema Kaseje, weekly attendance of a religious service is highest in Africa, with rates as high as 82 percent in Uganda and Ethiopia.²

There is the belief by some that climate may protect African people from the pandemic. But according to Dr. Denis Chopera, a medical virologist and Program Executive Manager for the Sub-Saharan African Network for TB/HIV Research Excellence (SANTHE), based at the Africa Health Research Institute):

Some African governments are responding to the pandemic but may need to pick up the pace in the coming days. Currently, Nigeria has closed its borders and airports. Ghana has closed all educational institutions. Uganda has banned weddings and large religious gatherings. Kenya has shut down schools. The 2014 Ebola outbreak also helped some countries, like Nigeria and Senegal, to be better prepared for the pandemic because they have been able to utilize existing research and laboratories.

According to africanews.com, as of April 4, there are 7,987 coronavirus cases in Africa. There are four countries virus free, Lesotho, Comoros, Sao Tome and Principe, and South Sudan. This may seem like a small number compared to the rest of the world; however, of the 900,000 global cases, the US has the most with 302,919.4 Fewer people have been tested in Africa, so this may account for the continent’s lower numbers. While the numbers appear to be low in Africa for now, medical and government leadership must get in front of this pandemic as soon as possible. Again, Dr. Kaseje informs us of how critical the situation is when she notes the example of Liberia, which has no intensive care units with ventilators.5

According to educator, activist and journalist Walter Turner, there are a number of factors that make Africa particularly vulnerable: (1) Lack of access to clean water and other environmental inequities; (2) large refugee and settlement populations; (3) recovery from conflicts and crises, e.g., South Sudan, Congo, Cameroon, and Northern Nigeria; (4) isolated rural areas; (5) compromised health systems; and (6) the burden of malnutrition and disease. 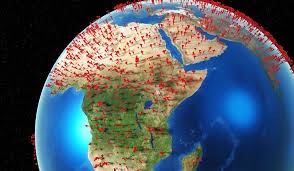 With regards to the first point, access to clean water is not simply an issue of poverty and drought. Getting water to cities and rural communities is a huge infrastructural problem. Drought caused by the climate crisis is linked to deforestation, which is largely driven by agribusiness and other extractive industries. Thus, drought and water scarcity are not simply issues of seasonal occurrences.6

Africa’s underpreparedness to fight COVID-19 is a result of its past. European colonial powers created infrastructures to extract African resources, leaving post-colonial African governments with inadequate systems in place. For example, when the French were forced out of Guinea in 1958, they removed everything, including doorknobs and light bulbs. In neighboring Guinea-Bissau, the ousted Portuguese left a beer factory, but no post-secondary educational institutions. Most African states at the time of colonial independence (1950s-1960s) had no trained doctors, administrative staff, or military professionals.

Ghana’s colonial past exemplified similar underdevelopment practices used by the British. But when Ghana became independent in 1957, the leadership of Kwame Nkrumah helped the people to make significant strides to develop a new society. During the period of 1957-1966, the Nkrumah administration created Ghana’s university system, Tema Shipping Harbor, and the foundation for Ghana’s industrial development. Ghana Airways, Black Star Line Shipping Corporation, its medical school, countless factories, and various other vital institutions were developed during this time.

As a pan-Africanist, Nkrumah believed in the unification of Africa. He wanted Africa’s resources to benefit African people. He believed a Union of African States was key to Africa recovering from the underdevelopment imposed by its colonial past. Had his vision come to fruition, Africa would likely be in a better position today to fight COVID19.