You are here: Home / Feature Story / AAPRP Solidarity Statement to the United Socialist Party of Venezuela 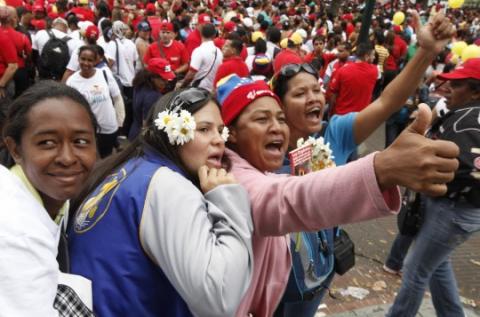 The All-African People’s Revolutionary Party (AAPRP) stands with the duly elected government in Venezuela of President Nicolas Maduro, elected in April of 2013 and the majority party, the United Socialist Party of Venezuela’s (PSUV) overwhelming victories in the municipalities in December the same year. We deplore the right wing forces and their imperialist allies’ use of violence in attempting to take what they could not win at the ballot box.

The United States funds terrorist acts in Venezuela and elsewhere outright with millions of dollars allocated from their congress. The reactionary opposition, including the corporate press, chamber of commerce, and upper class students in Venezuela, counts among its leadership, US educated Leopoldo Lopez of the Popular Will Party (whose corrupt practices caused him to be banned from holding public office) and Maria Corina Machado, who is associated with the extremist SUMATE organization. Many opposition groups receive direct or indirect US aid to finance a campaign of destabilization and regime change.

The AAPRP supports the Venezuelan participatory democracy process which is inspired by the commitment and work of Simon Bolivar.  A continuation of this legacy, a real human centered approach to democracy, includes the working classes in the revolutionary process which is in jeopardy today in Venezuela.  President Hugo Chavez started this process during his tenure with a people-centered new constitution, which the Venezuelan people not only ratified through referendum but helped create.  As a result, many lives have changed, especially the lives of the poor and formerly disenfranchised. The increase of health care services, the improvement of the education system, the enhancement of social security and the implementation of other social programs have caused a dramatic decrease in extreme poverty.

The AAPRP reaffirms that the Venezuelan revolution is part of the African and world revolution following the example of Haiti in  1804 and Cuba in 1959.  The Bolivarian Republic of Venezuela serves as a primary force and model for liberation in the region helping to form progressive regional blocs, the Bolivarian Alliance for the Peoples of Our America (ALBA), Community of Latin American and Caribbean States (CELAC) and by using its resources and will to help fight poverty, infant mortality and illiteracy in Latin America.  Despite the victories for the people’s movement in Venezuela and obvious societal improvements, history is repeating itself.  Much like the unsuccessful coup attempt in 2002 against President Hugo Chavez and the numerous attempts to destabilize Cuba and Haiti, US imperialism is once again seeking a regime change in a sovereign nation through subversive and terroristic means.

The AAPRP is confident that not one conscious person—especially conscious Africans— could support these imperialist attempts to destabilize Venezuela, the same Venezuela that stood against the US/NATO imperialist aggression and the overthrow of the legitimate government in Libya. We call on all just people of the world to stand against these attempts to destabilize Venezuela and ensure the survival and continuation of the Venezuelan Socialist Revolution.