You are here: Home / Feature Story / AAPRP Solidarity Statement in Support of the PAIGC Forward to Democratic Power Campaign 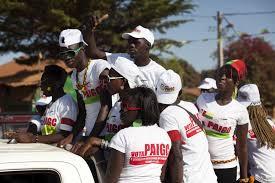 The PAIGC Makes History in Africa and the World.

History is made by the organized masses, and April 13th 2014 history was once again made by the People of Guinea Bissau, they once again chose their party, their party of liberation, the party co-founded by Africa’s immortal revolutionary leader Amilcar Cabral. The PAIGC (African Party of Independence of Guinea and Cape Verde) won 57 of the 102 seats in Legislative Elections. It will now form the Guinea-Bissau Government with the PAIGC President, Domingos Simões Pereira serving as Prime Minister.

The PAIGC will also lead the Legislative Branch, choosing the President of the People’s National Assembly (Parliament) enjoying the parliamentary majority guarantying people’s centered programs and budgets led by the PAIGC.

The PAIGC is the only revolutionary Party in Africa and possibly the world to lose State Power and later regain it twice.

Victimized by a coup d’état on 12 April 2012, the PAIGC was forced out of State Power and forced into opposition in an undemocratic “transition” imposed by an unholy alliance of neo-colonial forces; the coup makers in the Guinean military and political opportunist unable to win in the elections, supported by reactionary elements of ECOWAS troops from Burkina Faso, Ivory Coast, Nigeria and Senegal.

The PAIGC candidate for President of the Republic, Comrade Jose Mario Vaz, came in first place against 12 other candidates, with 41% of the vote. Now he is in a run-off against the second place candidate, Nuno Nabian who got 25%. Run-off Presidential Elections will take place on 18 May 2014. The campaign officially begins on 2 May, (the day after International Worker’s Day).

This first round victory is a result of the efforts from workers, women and youth in Guinea Bissau with support from pan-African and internationalist forces throughout Africa and the Globe. PAIGC needs your support in this crucial second round. The Presidential victory of Jose Mario Vaz will restore people’s power in Guinea Bissau and further the struggle for pan-African unity.

If you are interested in donating please send the funds via PayPal to the following email address: aaprpintl@gmail.com.

For more info go to www.aaprp-intl.org