You are here: Home / Archives / AAPRP Participates in International Anti-Imperialist Symposium in Turkey 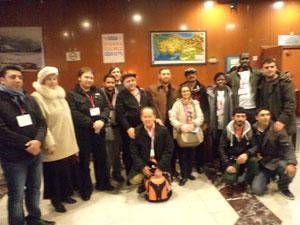 AAPRP militants joined comrades from across the world for the People’s Unity Against Imperialist Aggression Symposium in Istanbul, Turkey. The symposium was held between 2-4 March 2012. This was the third symposium organized and hosted by Halk Cephesi (the People’s Front), one of the largest revolutionary socialist parties in Turkey. The AAPRP delegation included a Central Committee representative from the AAPRP Ghana Chapter. The AAPRP first made links with members of the People’s Front in 2010 while doing solidarity work in Cuba.

The aim of the symposium was to create genuine and practical unity amongst anti-imperialist forces. Delegates came from all over Europe, Africa, Asia and the Americas and contributed to a vibrant and productive symposium. On the first and second day, speakers from various organizations gave their own perspective on how they are struggling against imperialism. A clear message was that the United States is at the forefront of a renewed Imperialist push to grab resources and neutralize progressive governments.

Delegates gathered on the third day of the symposium and spent several hours formulating a final declaration. Many important ideological and practical points were discussed in detail and the delegates were able to come to an agreement on a joint declaration. View the Final Declarations.