You are here: Home / Archives / AAPRP Endorses the Millions for Libya March! 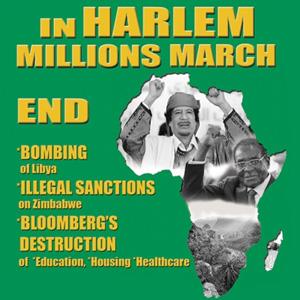 The All-African People’s Revolutionary Party, (A-APRP), has been involved in active Revolutionary relations with the Jamahiriya of Libya for more than 40 years. We have defended and supported Libya historically whenever imperialist have attacked her, including unconditional political support, smashing illegal travel bans, smashing sanctions and military attacks, such as in 1986 and now we are intensifying our political work against the NATO imperialists bombings that began in March, preceded by mercenary military uprisings in February 2011.

Beginning in February 2011, we have been in the vanguard issuing democratic Political Statements on our official A-APRP website, including “Libya is not Egypt and all rebellions are not Revolutions” and sent to as many of our allies and brother-sister organizations as we could followed up by international interviews, in Africa, Europe, North America and the Caribbean on radios, TVs, newspapers and other social media.

Simultaneously, we have been in the forefront of mass marches, rallies, seminars in Africa in areas such as Ghana and Guinea-Bissau, (intensified in February before NATO began its bombing campaign) and have participated in others in the Diaspora in areas such as Atlanta GA, London, L.A., St. Louis, MO, to name a few. All of our African Liberation Day activities organized by our great Party building formation in In Guinea- Bissau, Ghana, U.S. Virgin Islands, London, England Chicago, IL, Wilmington, Toronto, Canada, Detroit, MI, Atlanta, GA, Washington, DC, Oakland and Los Angeles CA, as well as other ALD activities in Africa and the Diaspora influenced by the A-APRP highlighted our political work against NATO imperialist bombings, arming of ground troop mercenaries, (based in Benghazi) while re-confirming our unequivocal support for the Jamahiriya, the Leader of the Revolution – Muammar Al Qadhafi and the People of Libya.

We are now intensifying coordinated actions in Support of the Jamahiriya, the Leader of the Revolution – Muammar Al Qadhafi and the People of Libya.

The A-APRP is fully endorsing the “Millions for Libya March” planned for Saturday, August 13, 2011 in Harlem assembling on Malcolm X Blvd at 110th Street at 10 AM.. NOI: Final Call National News Article

This historic march is being organizing by traditional A-APRP sister organizations and allies, (such as the Nation of Islam, December 12th Movement, and former Foreign Minister of Nicaragua, among others). Our Central Committee calls on you to re-double your efforts in mobilizing all support and contacts to support this historic march. We want all our support, contacts, etc. to be in Harlem on 13 August! Those who cannot physically attend should support preparations, join the local Preparatory Committees in your area and if they don’t exist, organize one. Publicize by any and every means necessary, give material support to those who are going and support follow up; (publicize the march in social media and traditional press). Where feasible, organize similar support activities in your area, either on the same date, or later. For example, an activity will be held in Guinea-Bissau on 11 August. We will make sure that the information on “Millions for Libya March” is published on the Official AAPRP Website, as well as AAPRP Chapter or individual accounts of AAPRP militants on “Facebook”, “Twitter”, etc…

For more detailed information, please email us at contact@aaprp-intl.org

Africa is at war! We are being attacked! Fight back! “…Either you concretely work for Mother Africa or by your inactions you are working against her…” (Kwame Ture)