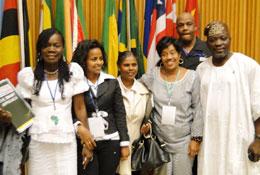 The conference was hosted and organized by the Ethiopian and Cuban Friendship Association based in Ethiopia and the Cuban Institute of Friendship with People (ICAP) based in Cuba. Cuba, as part of its long-standing commitment to the grass roots international solidarity movement, established ICAP back in 1960. The friendship association is one of many such associations flourishing throughout Africa and the entire world.

There were three main objectives of the conference:

There were many wonderful testimonies around varied assistance Cuba has given to Africa over the years. Some included the military assistance to African Liberation Movements over the course of 4 decades, the numerous doctors/teachers Cuba has provided to Africa as well as the number of students from Africa that have been trained in Cuba. Many university alumni among Africans born on the continent which have received free university education in Cuba were among the attendees.

African hospitality was also on high display throughout the weekend of events. On the 21st there was a meet and greet reception at the Ethio-Cuba Friendship Park. The friendship park was inaugurated in 2007 by the Ethiopian government for the purpose of recognizing the sacrifices of Cuba and the lives of 163 Cubans (including many Africans) lost during the 1977 conflict with the Said Barre regime of Somalia. Participants and the hosts were provided several opportunities to experience the local African cuisine and cultural performances at a traditional restaurant in Addis Ababa.

The conference concluded with proposals and resolutions relative to the stated objectives presented during the conference. Some of which included delegates’ commitments to return to their local areas and press for the abolishment of the economic embargo, collective pressure calling for the release of the Cuban 5 and continuing efforts of grass roots solidarity work between Africa and Cuba in terms of industrial and educational development. There was also a motion put forth by the PAIGC of Guinea-Bissau via the Prime Minister Carlos Gomez Jr. (deposed in April 2012 in an illegal and unpopular coup) for the next solidarity conference to be held in Guinea-Bissau, West Africa.