You are here: Home / Current Events / A Truly Independent Africa is a Death Sentence for Capitalism-Imperialism 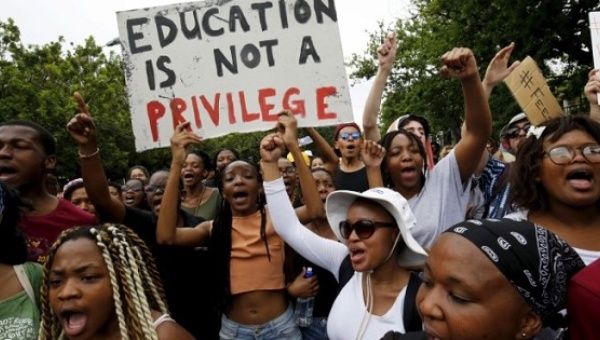 Capitalism-Imperialism being the unjust, anti-people and exploitative economic system it is depends on a wide variety of offensive strategies to maintain and advance its agenda via the oppression and exploitation of the world’s majority. Despite the overwhelming military-police apparatus at its disposal, the primary strategy has been and continues to be to prevent an organized mass-based class conflict from ever happening against itself.  Capitalism-Imperialism knows that it cannot win such a conflict against its extremely small ruling class.  Capitalism-Imperialism has been able to momentarily delay the inevitable class conflict by the masses of the people, primarily through psychological and cultural intrigues against the people. These intrigues are classic divide and rule strategy which pits the workers against the workers, the peasants against the peasants, immigrant workers against “indigenous” workers, places emphasis on “reforming the system” and having the people stuck so much on dealing with basic daily survival that the energies are given towards everything but a systematic planned and organized struggle for our own liberation.

One of the arguments (read lies) which the capitalist class consistently advances, through both its media mouthpiece and the mis-education system, is that the masses of African people are downtrodden not because we are exploited and oppressed by capitalism-imperialism but because we are lazy and unable to pull ourselves up by our own bootstraps. History however provides extensive evidence that every initiative designed towards independent political and economic development by and for African people has been systematically sabotaged by every imperialist government without exception. Let’s take a short look at a few examples:

“My decision to destroy the authority of the blacks in Saint Dominque (Haiti) is not so much based on considerations of commerce and money, as on the need to block for ever the march of the blacks in the world.”  – Former French Emperor Napoleon Bonaparte

Haiti was the first country in the world to outlaw slavery when it won independence from France in 1804 via armed struggle. Independent Haiti further assisted the freedom struggle in other parts of the Americas (including substantial assistance to Simon Bolivar) and proclaimed that any African reaching its shores would be free there and provided security. This was a threat to the entire slave and rapidly developing capitalist system operating in the Caribbean and the Americas for France, U.S. and the rest of Western Europe. France, to stifle the development of Independent Haiti, forced reparations payments from Haiti to compensate France for its “loss” based on Haitian Independence. The total payments took over 120 years, from the mid 1820s to the 1940s, to complete. Further, the U.S. invaded and occupied Haiti from 1915 through 1934. In recent times, Haiti has suffered under a decade and a half occupation by the United Nations (U.N.) that has caused wide-spread disease including the introduction of cholera, child rape by U.N. soldiers and continued looting of national resources including gold, bauxite and oil, etc; all of which should be getting used to lift the African masses in Haiti and surrounding areas out of poverty and underdevelopment.

The New Jewel Movement (NJM) was a socialist movement which in four short years between 1979 to 1983 rapidly increased the living standards of the masses of the people in the small eastern Caribbean Island populated by mostly African people. This included drastic reduction of unemployment (over a 35% reduction), reduction in dependence on food imports (based on local production increases), implementation of free health care, secondary school education and increase in literacy rates up to 98% to name a few. The NJM government also was developing friendly relations with other revolutionary forces in Africa and other parts of the world. The Reagan administration of the U.S. launched an invasion in 1983 shortly following the killing of the NJM leader Maurice Bishop. Between 6,000 and 7,000 U.S. troops at its height occupied the small island of only 96,000 people, overthrew the NJM government and eventually installed a puppet regime. While the invasion was triggered by Reagan under the guise of helping U.S. students studying there to get out from the conflict, later reports from the Washington Post showed that the U.S. military had exercised a mock invasion of Grenada 2 years earlier in Puerto Rico and viewed the Grenada Revolution as part of the domino theory which, if left unchecked, would eventually inspire socialist revolutions in other parts of the region.

In the tradition of Post-Independent revolutionary states like Ghana under Kwame Nkrumah (CPP) and Guinea-Conakry under Ahmed Sekou Toure (PDG-RDA), Libya had developed as a beacon of hope not only for its own citizens but for the whole of the African world. The Libyan Jamahiriya utilized its emmense oil and other resources as they should be used: for the people’s development. Home ownership was made to be a natural human right. Education through the university level as well as medical care was provided free of charge. Libya was moving towards implementing a currency free from the U.S. Dollar and in recent times became the strongest national advocate for Pan-Africanism among African countries.  However, in 2011, under the cover of the Arab Spring, western imperialist countries backed traitorous forces to wage a counter-revolutionary offensive and then eventually with the entire force of NATO (North Atlantic Treaty Organization) overthrew the Jamahiriya government, contributed to the eventual murder of Muammar Gaddafi and turned the country on its head. Though it should be noted that while not in the capitalist controlled media, the revolutionary forces in Libya are still fighting to reinstitute people’s control of the country.

These are only a few examples of the non-stop sabotage faced by African people in response to our attempts at independent development. Whether on a grass roots organizational level or a national level, the interference and sabotage has been relentless by the people’s enemy. The stated examples do not even include the Zimbabwe’s Third Chimurenga, the Black Panther Party, UNIA-ACL, Revolutionary Ghana, Burkina Faso, Black Wall Street, the M.O.V.E. Organization and too many others to name. The point that must be hit home in the minds of our people is the following. Africa and African peoples’ (both home and abroad) truly advancing in terms of revolutionary social-economic development means ultimately the destruction of the capitalist-imperialist system, its appendage of white supremacy and the end to the small capitalist ruling class which has pillaged and plundered the human and material resources of the world for their selfish benefit for the last 500+ years. The Trans-Atlantic slave trade and the subsequent colonization of Africa served as part of the foundation of the imperialist system in which the ruling classes of a small number of countries live off of the economic exploitation and impoverishment of others. This truth led the great African Revolutionary, Ahmed Sekou Toure to proclaim that Imperialism will find its grave in Africa.

Unfortunately there is no ‘nice’ way to get this beast off of our neck. There is no middle of the road solution that will solve the problem of mass homelessness, landlessness, social-economic and political insecurity and instability which is actually part and parcel of the Capitalist-Imperialist system.  Capitalism-Imperialism is a system which creates comfort and luxury for a small few at the expense of the large majority. For the All-African People’s Revolutionary Party (A-APRP) and a growing number of organizations, movements and individuals, we take the position that the only way towards mass peace, stability and prosperity is through the abolishment of Capitalism-Imperialism and the establishment of its completely opposite manifestation: Scientific Socialism. For Africa and African people, whose specific oppression is facilitated by the existence of small, unviable micro-states incapable of fighting against imperialism or developing on its own, Scientific Socialism for us will be most successfully developed within the context of African Unity. Thus the objective of the A-APRP is Revolutionary Pan-Africanism: The total liberation and unification of Africa under scientific socialism. We humbly invite you to join us in the effort.