You are here: Home / Feature Story / The A-APRP Stands with Palestine 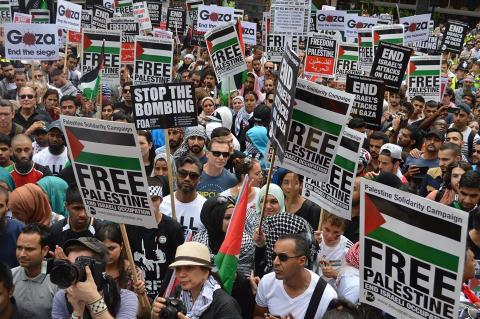 Continuing with our staunch anti-Zionist line, and our unflinching support for the struggling and oppressed Palestinian People, the All African People’s Revolutionary Party, once again, strongly condemns Israel’s deplorable massacre of Palestinian civilians and sixty-six (66) years of the occupation of Palestine.

Our party deplores the role of the United States of America, along with its European allies in supporting, financing, and arming Israel. We condemn Zionism and what it represents–colonialism, dispossession and racism. Zionism is not a religion, it is a racist ideology and a systematic crime against humanity. Zionism is increasingly being rejected by Jews ranging from Holocaust survivors, to soldiers who refuse to serve, to veterans who are speaking out about crimes they have witnessed or committed, to intellectuals whose painstaking research allows them to refute Zionism’s distorted version of history, to religious leaders who recognize and declare that:

“According to the Torah and Jewish faith, the present Palestinian Arab claim to rule in Palestine is right and just. The Zionist claim is wrong and criminal…” (Rabbi Ahron Cohen of Neturei Karta, International)

The All African People’s Revolutionary Party salutes these honest and brave Jews who have stepped forward, to publicly stand shoulder to shoulder with the Palestinian people against Zionism.

Our Party has uncompromisingly and unconditionally supported the Palestinian People for more than four decades, and continues to support their courageous resistance against the Zionist onslaught. This struggle has gone on for over a century and the present situation in Gaza is part of a long history of Israel’s ethnic cleansing and genocide of Palestinian People. We respect and support their right to resist Israel’s genocidal slaughter, as well as their right to choose their leadership without interference or coercion from any external forces. Our Party supports the right of the Palestinian People to reject any false illusion of peace, which fails to restore the most fundamental human rights to the Palestinian people. Our Party supports the right of all Palestinian People to return to their homeland and peacefully resume their lives, side by side with people of all nationalities and all religions, as they have for over a thousand years, in a democratic, secular state in Palestine. We support the campaign of boycotts, divestment and sanctions (BDS) against Israel until it complies with international law and Palestinian rights. We categorically reject the suggestion that a resistance movement is terrorist. Resistance is not terrorism; racist, settler colonialism is terrorism; genocide is terrorism; Zionism is terrorism; and colonial occupation is terrorism. Presently, all of Palestine is under occupation. Palestine is not simply the Gaza Strip and the West Bank, but all of historic Palestine, un-partitioned, and un-annexed, and a single secular, democratic state is the only viable solution to the decades of crisis in the region.

The capitalist press and media in the US and western European nations are largely owned and controlled by corporate, pro-Zionist interests. They have deliberately failed to inform the public of the truth about Palestine and Israel. These companies, including BBC, CBS, ABC, NBC, CNN, NPR and others, as well as most major press outlets continually suppress, distort, and lie, in an effort to support the Zionist, settler, Israeli regime. But the truth about the present massacre and the history leading up to it are coming to light, with the proliferation of social media which enables the people to bypass the corporate media, and get the truth out. In an attempt to cover-up their slaughter Israeli troops have begun confiscating the cell phones and cameras of Palestinians, independent news agencies and foreign journalists. Our Party urges you to remain informed with truth.

For a more comprehensive understanding of our position on Palestine and Israel, please visit the links below: