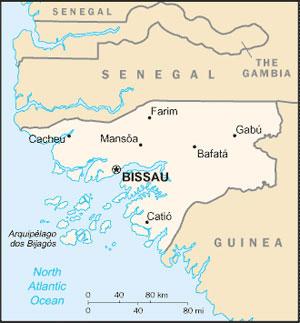 The Central Committee of the A-APRP whole- heartedly condemns the illegal and reactionary coup d’état against the democratically elected institutions/Government of Guinea Bissau and the subsequent repressive acts of aggression against the PAIGC leadership and activists, which we see as an assault on the dignity and respect for the masses of the People of Guinea Bissau and all of Africa!

On Thursday, April 12, 2012, a group of disgruntled military personnel who identify themselves as the “Military Command” began an onslaught of aggressive and violent attacks against the democratically elected leadership of the African Party of Independence of Guinea and Cape Verde (PAIGC) and against the masses of the people of Guinea Bissau.

The so-called objective of this illegal, reactionary and anti-democratic attempted coup d’état is to overthrow the democratic desires of the People of Guinea Bissau and prevent the run off special presidential elections which were scheduled for April 29, 2012. Their claims and allegations against the democratically elected leadership of Guinea Bissau have been found baseless and unfounded lies and innuendo having provided not one shred of proof. It is clear that the reactionary military personnel are only interested in politically and economically enriching themselves and benefiting from the resources of the people by establishing a neo-colonialist government at the expense of the masses of the People.

These reactionaries are not supported by the majority of the masses of the people, the PAIGC, mass people’s formations such as the Trade unions, women’s organizations, youth organizations and social organizations. When the military ordered all public and private radio stations to go off the air and to end the strikes, the people responded with courageous radio programs, mass demonstrations and the unions to continue to strike in defiance of the reactionary military junta.

The coup d’état process in Guinea-Bissau took another step towards consummating itself in the early hours of 11 May 2012. The psychological war intensified with attempts to impose decisions completely contrary to any other previous decision of ECOWAS or any other African and international institution. In short, a delegation of Nigeria and Ivory Coast came stating that they were sent by ECOWAS with credentials from the Final Resolution of the United Nations Security Council Meeting of Tuesday, (8 May) to resolve the politico-military crisis without CPLP, African Union or any other institution, saying that “…only ECOWAS can bring troops into West Africa and not CPLP…”, (contrary to what is stated in the United Nations Security Council Final Communiqué of 8 May 2012-which calls for collaboration between ECOWAS, CPLP, AU with the UN).

They (ECOWAS ) announced their decision to instate the traitor Serifo Nhamadjo as Interim President of Guinea-Bissau immediately with ECOWAS protection and a mandate for him to appoint a so-called “consensus” prime minister to form a transitional government with a one year mandate. They also announced that democratically elected Interim President Raimundo Pereira and Prime Minister/Presidential Candidate Carlos Gomes Junior would not return to Guinea-Bissau, without justification or supporting documentation from the AU, CPLP or other international organizations!

This act reflects that ECOWAS leadership supports the neo colonialist /anti-democratic agenda despite the fact that this formation was mandated to support the interest of the masses of the people. In whose interest do they protect? The United States was one of the first countries to ‘welcome ECOWAS’ appointment of Manuel Serifo Nhamadjo has leader of a transitional government. If the U.S. and ECOWAS decisions were to prevail, we would no longer need to hold democratic elections!

The All African People’s Revolutionary Party calls for the immediate hand over of political power back to the democratically elected leadership of the PAIGC. We are confident in our People, in truth, in justice, in our PAIGC and our Pan African and Revolutionary Socialist comrades, alliances and brother sister organizations and we are asking for their continued support.

Under the chairmanship of Commander Manuel Saturnino Costa, First Vice-President of the Party, the Central Committee of the PAIGC met, 14 May 2012, to analyze the Political and Military Situation in the Country. After a thorough discussion, the PAIGC Central Committee decided as follows:

Please share this information with our worldwide justice loving communities, press, progressive/revolutionary political parties and movements and we ask you to organize demonstrations, marches, press conferences and any collective gathering to bring attention to this illegal and anti-democratic assault against to the People of Guinea Bissau/ Africa and all justice loving people!

We have truth and the masses of the People on our side. Our people are fed up with the opportunistic elements of the armed forces and egotistical neo colonialist politicians (both in Guinea Bissau, throughout Africa and worldwide). There will be sacrifices, setbacks and victories. The final Victory belongs to the organized almighty People.

WE WILL WIN!
Zero Tolerance for Coup d’états!
All power to the Revolutionary Masses!
Forward to Pan Africanism