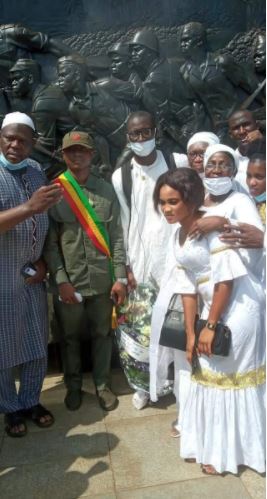 Tribute to the Victory of Resistance of the PAIGC / PDG-RDA against NATO invasion of the People’s Revolutionary Republic of Guinea, 22 November 1970

22 November 1970 – 50 years ago, what was conceived to be a great defeat to the Pan-Africanist Revolution was transformed into one of Africa’s greatest victories against imperialism.

As part of NATO, the Portuguese colonialist devised a desperate plan to neutralize the People’s Revolutionary Republic of Guinea as the Base for the PAIGC and other Liberation Movements. According to records from Portuguese troops involved, they mainly used ships and rapid boats, but also organized land-based attacks from Senegal and the Ivory Coast. Thad many targets that included the Guinean radio station, and TV; to kill Sekou Touré, Kwame Nkrumah, Amilcar Cabral and other PAIGC leaders; kill the President of the Guinea National Assembly, Saifoulaye Diallo, the Prime Minister Lassana Beaguvi, among others.
The imperialist invader had on board, anti-Guinean Siridiou Diallo, an exile living in Paris, who would be installed as “president” of what was to become neo-colonial Guinea-Conakry after Sekou Touré was neutralized (if their plan had worked).

The plan consisted of an amphibious attack on Conakry, capital of the Republic of Guinea, with several objectives:

The commander, Lieutenant Captain Alpoim Calvão, concerted with the President of Portugal, the Governor of “Portuguese-Guinea” and even personally flew to apartheid South Africa to bring back small bombs in his briefcase. Prior, they had already sent recognizance ships with PAIGC flags. In a Guinea-Bissau Island called Soga, they trained Commandos (Portuguese troops born in so-called “Portuguese-Guinea”).

The Communist Party of Portugal got information that Portuguese authorities were buying Russian weaponry, such as AK-47 machine guns and RPG grenade launchers. They informed the PAIGC somewhere around July 1970 that there may be an imminent attack against Conakry. The USSR KGB also provided the Guinean authorities with intelligence. The only question was when and exactly how.

On the night of 21–22 November 1970 about 200 armed Guineans — attired in uniforms similar to those of the Guinean Army and commanded by Portuguese officers — and 220 African-Portuguese and Portuguese soldiers landed at points around Conakry. The soldiers landed from four unmarked ships, including an LST and a cargo vessel, and destroyed 4 or 5 supply vessels of the PAIGC. Others landed near President Touré’s house, which they burnt. [4] Touré was in an unknown location at the time, where he announced that “foreign warships” were in Guinean territorial waters, the President declared in the afternoon that “hundreds and hundreds” of “mercenaries of various nationalities” were in the Guinean capital

Other soldiers captured two army posts, took control of the city’s main power plant, captured the headquarters of the PAIGC (but not Amílcar Cabral), and freed 26 Portuguese POWs who were being held by the PAIGC at Camp Boiro. Guinean militia forces fought the raiders with little success. Amilcar Cabral and Ahmed Sekou Touré couldn’t be found. When the raiders discovered that the Migs were not at the airport, they retreated after suffering casualties. 328 citizens of Guinea-Conakry died defending African soil.

They also attacked Kundara and Boke. There are stories that in Kundara even bees attacked the Portuguese invaders. The army troops who were coming from the countryside with arms in hands did not get to Conakry until the evening time. By 10:30 p.m. the people held all the strategic points in Conakry. President Toure said, “We have no better defenders than ourselves.” There were more landings of mercenaries and fighting went on the next day (23 November) and night before the invaders were in full retreat, defeated by Africa. Many countries in Africa responded to President Toure’s appeals for help, Nigeria and Sierra Leone offered to put their armies at Guinea’s disposal, Egypt offered airborne troops, Libya and Algeria sent arms and ammunition, in Somalia a register was opened for volunteers to fight in Guinea , the Secretary General of the OAU reported that the 41 member-states of the OAU was in complete solidarity with Guinea, Tanzania sent a heavy financial contribution, students in the Ivory Coast and in other places in Africa organized demonstrations in support of Guinea. Africans all over the world gave aid and assistance to the war victims. This was a truly a Pan-African response.

This operation was considered a failure because the desired coup d’état was not achieved: the absence of the Mig’s at the airport made Commander Alpoim Calvão order the troops to return, fearing an attack by these planes for which they were not prepared, without support the FLNG fighters. Ironically later it was learned that his pilots were not yet ready for combat.

The FLNG guerrillas who, despite the lack of support, still wanted to move forward with their mission were unable to overthrow the regime, due to the lack of support from the population they naively counted on and to the counterattack by the loyal forces against Sékou Touré supported by a contingent of Cuban troops. The fighting lasted several days, with the FLNG suffering numerous deaths and 100 of its members were taken prisoner, tortured and subsequently executed as well as a group of twenty men who deserted during the operation and who still went to the radio station to transmit that they supported the PAIGC and who wanted to belong to their ranks.

Many say that the PAIGC was the main force that prevented the imperialist invasion from overthrow of Sekou Toure as President.
According to Radio Conakry, a second attempt to invade Guinea was made late on Nov. 23 but was also foiled, President Sekou Toure having been in full control of the situation. It was admitted the same day, however, that, although the invaders had failed to occupy the airport, they had captured the Camayenne prison and released political prisoners, including Colonel Kaman Diaby, the former Army Chief of Staff who had been condemned to death in 1969 [see 23408], and that they had wrecked the headquarters of the African Party of Independence of Guinea and Cape Verde (PAIGC) —whose guerrilla forces were active in Portuguese Guinea. It was, however, reported on Nov. 24 that Senor Amilcar Cabral, the PAIGC leader, was “safe and sound”
Radio Conakry announced on Nov. 24 that a third attempt by the “mercenaries” to land in the city had been repulsed but that the foreign ships were still patrolling the coast.

On Nov. 28 Radio Conakry claimed that there had been a further attempted invasion, this time by about 200 “mercenaries” entering Guinea from Portuguese Guinea, but they had been surrounded by Guinean troops near Koundara, and the next day it was asserted that 30 of the invaders had been killed and 18 captured. The “Voice of the Revolution”, broadcasting from Conakry on Dec. 2, appealed to all Portuguese soldiers in Guinea-Bissau, Angola and Mozambique to desert and join the forces of the nationalist movements before the African people would hold them to account for their deeds, as the “final confrontation with Portugal” was approaching.

Within a week of the invasion, Touré set up a ten-person committee: the Haut-Commandement (High Command). Staffed with loyal members of the Political Bureau, the High Command ran Guinea by decree. The High Command oversaw arrests, detentions without trial, and executions. The High Command’s actions decimated the ranks of government and police officials. Notable among the victims were the President of the Central Bank of the Republic of Guinea and the Minister of Finance Ousmane Baldé. [5] After a five-day trial, on 23 January 1971, the Supreme Revolutionary Tribunal ordered 29 executions (carried out three days later), 33 death sentences in absentia, 68 life sentences at hard labor, and 17 orders of confiscation of all property. The Portuguese-African troops who had defected to Guinea received life sentences at hard labor. Eighty-nine of those charged were released, but dissidents say some people “disappeared” into prison or were executed extrajudicially. Those sentenced to execution included members of the governing party (including the neighborhood party chiefs in Conakry), Conakry’s Chief of Police, a secretary to the President, an assistant minister of finance, and at least five Guinean soldiers. Those who had their property confiscated were either French or Lebanese. The fate of other Europeans who were arrested is unknown. Among those who received life sentences were former government Ministers, heads of state industries, a former regional governor, and the top two officials of the National Museum.

In July 1971, Touré purged the army of some of its officers. In April 1973, he purged his regime of some of its ministers. To date, Portugal doesn’t officially recognize that they attacked an Independent Country, The People’s Revolutionary Republic of Guinea. Throughout the entire process, they tried to keep their involvement as a secret. They had the Portuguese soldiers involved all sign documents that they were dismembered from the Portuguese Armed Forces. They denied their involvement before, during and after the invasion.